This morning I stumbled across a listing for a “Boy’s All Terrain Fat Bike” from Mongoose which had me wondering – why was it a “boy’s” bike and not just a  bike for kids? The product specifications and description only added to my confusion:

“Mongoose boy’s bike gearing: 7 speeds with Shimano rear derailleur for all types of riding. . . The aluminum steel frame is both strong and durable and allows young boys to explore their surroundings on a true all-terrain bicycle.” 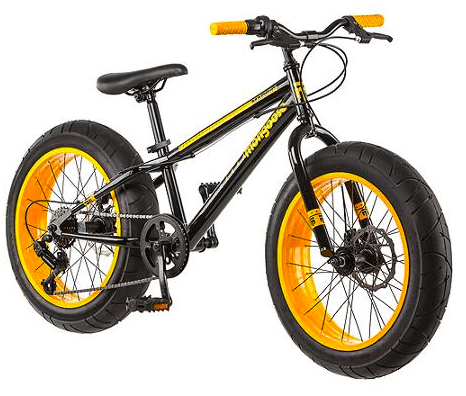 It’s clear through initiatives such as the National Forum on Women in Bicycling, there is interest in encouraging more of us to take up cycling. But I can tell you as a rider, racer, and mom, all the positive changes can be undone by the little things.

It continues at local races when announcers thank the “wives and girlfriends” for supporting their men while racing, but don’t share similar sentiments when the women ride. Understanding the announcers do not intend anything more than to add some color and humor to the race, comments like these can come off as sexist, and could be off-putting to those spectators (including our daughter) who might otherwise be interested in joining the fun.

Lumping young girls in with older boys, or cutting women’s races short because of scheduling issues, discourages not only potential racers, but also those of us thinking about getting our children to join us at races. Let’s think about the girls racing with “big boys” during the national cyclocross championships – talk about a situation that was probably intimidating and discouraging for racers and their families.

Even as I write this, I know there will be those who think I’m making too big a deal out of these items. I have seen those racers who dare speak up about shortened races effectively shut down on social channels as being whiny or overly critical towards race organizers.

So what can we do? Stop unnecessarily labeling items by gender. Cut out the sexist commentary. Give girls and women’s races the same respect as the boys and men. Take critiques and criticisms seriously but not personally.

There is no question that those in the industry are making progress as they advocate for women riding. Let’s not negate these efforts through a “death by a thousand cuts.”